Science says self care is good for mental health

AAAHHHHHH the answer to a better you !

Science says self care is good for mental health! Who knew, right? 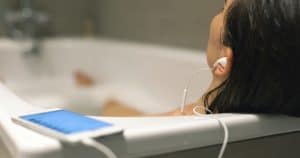 Listen up, y’all: Consider this your daily reminder to always find time to treat yourself AKA “self health” to the wonderfully simple things in life. It’s easy to forget that basic self-care activities can be legit game-changers when it comes to your overall well-being, but the results of a new study are here to remind you just how powerful these practices can be. For instance, this new study suggests that baths are great for your mental health, and the reason why might just blow your mind a little because, aside from your fingers and toes getting a little prune-y after a while, soaking in the tub might have an even stronger effect on the inner workings of your body.

According to Health, this warm and relaxing news comes from the University of Freiburg in Germany, where researchers studied the effects of baths on 45 volunteer participants struggling with depression. The volunteers were split into two groups: The first was instructed to take a bath each day for about 30 minutes, and the second group was told to do about 45 minutes of aerobic exercise two times a week.

After eight weeks of these practices, the researchers went on to test the moods of the volunteers with a scale that’s commonly used to measure depression in these types of studies, as per Health. According to the study, the researchers found that those who took daily baths for eight weeks showed more positive moods overall, as they scored about six points lower on the depression scale compared to where they were at before the experiment began. Those who exercised for eight weeks, on the other hand, scored only three points lower on the depression scale compared to their baseline readings.

As Health pointed out, the study only involved a small sample of people, so while these findings can’t necessarily be applied to a larger population of people struggling with mental health issues, the researchers wrote in their paper that regular baths seem to lead to a “clinically relevant improvement in depressive disorder,” once the practice becomes part of a regular self-care routine.

So why exactly do baths have this effect on your mood? Well, aside from the fact that they’re, objectively speaking, pretty relaxing in general, the researchers explained in their study that getting your body super duper hot in a steamy bath is actually a method that’s been used to treat mental health for a long, long time. The researchers wrote in their paper,

Fever, respectively hyperthermia, has been used as a medical treatment since ancient times, and beneficial effects of fever on mental illness were already described in antiquity (10). Based on recent findings, there is growing scientific evidence that hyperthermic baths (HTB) and whole body hyperthermia (WBH) might be efficacious for treatment of depressive disorders.

But, rest assured, baths aren’t a totally outdated way to take care of your mental well-being. According to Alicia Racine, a clinical therapist at CAST Centers, temperature changes in the body can definitely be an effective and practical method to help treat your mental health.

In fact, Racine tells Elite Daily over email, baths and showers are practices that are sometimes used in something called dialectical behavioral therapy (DBT). “DBT offers a skill called TIPP,” she explains. “TIPP stands for ‘temperature, intense exercise, paced breathing, and paired muscle relaxation.’ It is used to help a person [physically] regulate themselves from emotional distress.”

According to Racine, taking a hot bath, or even a cold shower, can be very effective in alleviating anxiety symptoms for some people, all because of the way temperature changes affect the body, and in turn, the mind.

So, are you ready to break out the lavender salts and bubbles? I know I am.

Follow our blog and visit www.eliteweightloss.com for more regarding weight loss and supplements.