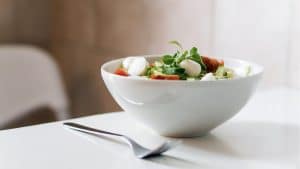 Are you looking for foods with negative calories?

What are some dietary strategies for the prevention and treatment of obesity? Large portion sizes are often targeted, so restriction of portion size is an important element of many diet programs. But it’s hard to get people to eat less food. A more effective approach may be to shift the emphasis from the quantity of food eaten to the quality of food eaten. By choosing foods with lower calorie density, we can eat the same amount or even more food and still lose weight.

My video Are There Foods with Negative Calories? explores whether there are foods that take more energy to digest than they provide. Does eating celery, for example, result in a negative energy balance? “Celery is a readily available whole-food that has the ability to add bulk and flavour to a meal, without adding excess calories. Celery is also subject to a renowned health myth, that when consuming celery there is a ‘negative’ intake of calories and therefore the energy required for its digestion, assimilation and nutrient storage is assumed to be greater than the energy it contains.”

So researchers put it to the test. A cup of celery, which is about two stalks, has 16 calories. Digesting that much celery takes about 14 calories. So, no, consumption of celery does not induce a negative energy balance, but you are only left with 2 calories. “This fact combined with the high fibre and water content of celery does make it a good snack for inclusion in a diet for weight loss or management.”

Elite Weight Loss Supplements are a great addition to dieting and cutting back on calorie intake as well. To find those go to www.eliteweightloss.com

Maybe negative calorie foods are not a myth after all, though. Researchers at Penn State offered people a meal of pasta and instructed them to eat as much as they wanted. What do you think happened when they gave people a small salad in addition to the all-you-can-eat pasta? The subjects consumed about 50 calories of salad. Were those 50 extra salad calories in addition to the pasta calories? No. Subjects ended up eating less pasta overall, and not just 50 calories less. They consumed 65 fewer calories of pasta.

When researchers added an even bigger salad, the subjects ended up eating 100 fewer calories of pasta. So, effectively, the salad did provide “negative calories” in that the subjects ate more food than had they only eaten pasta but ended up with fewer calories in their system because the salad bulked up their stomachs so much. Of course, it depends what kind of salad. We’re not talking about the typically available salads with ranch dressing and cheese. With those types of salads, you may end up eating less pasta, but there are so many calories in conventional salads you end up worse off calorie-wise in the end. But, healthy salads worked. The study concluded, “‘Eat less’ is not always the best advice. For foods very low in energy density, such as water-rich vegetables, larger portions increase satiety [the feeling of fullness] and reduce meal energy [calorie] intake.”

It’s not surprising that filling up on healthy food right before a meal cuts down on overall caloric intake, but what if, instead, we snack on healthy foods between meals? Would we get the same weight-reducing effect?