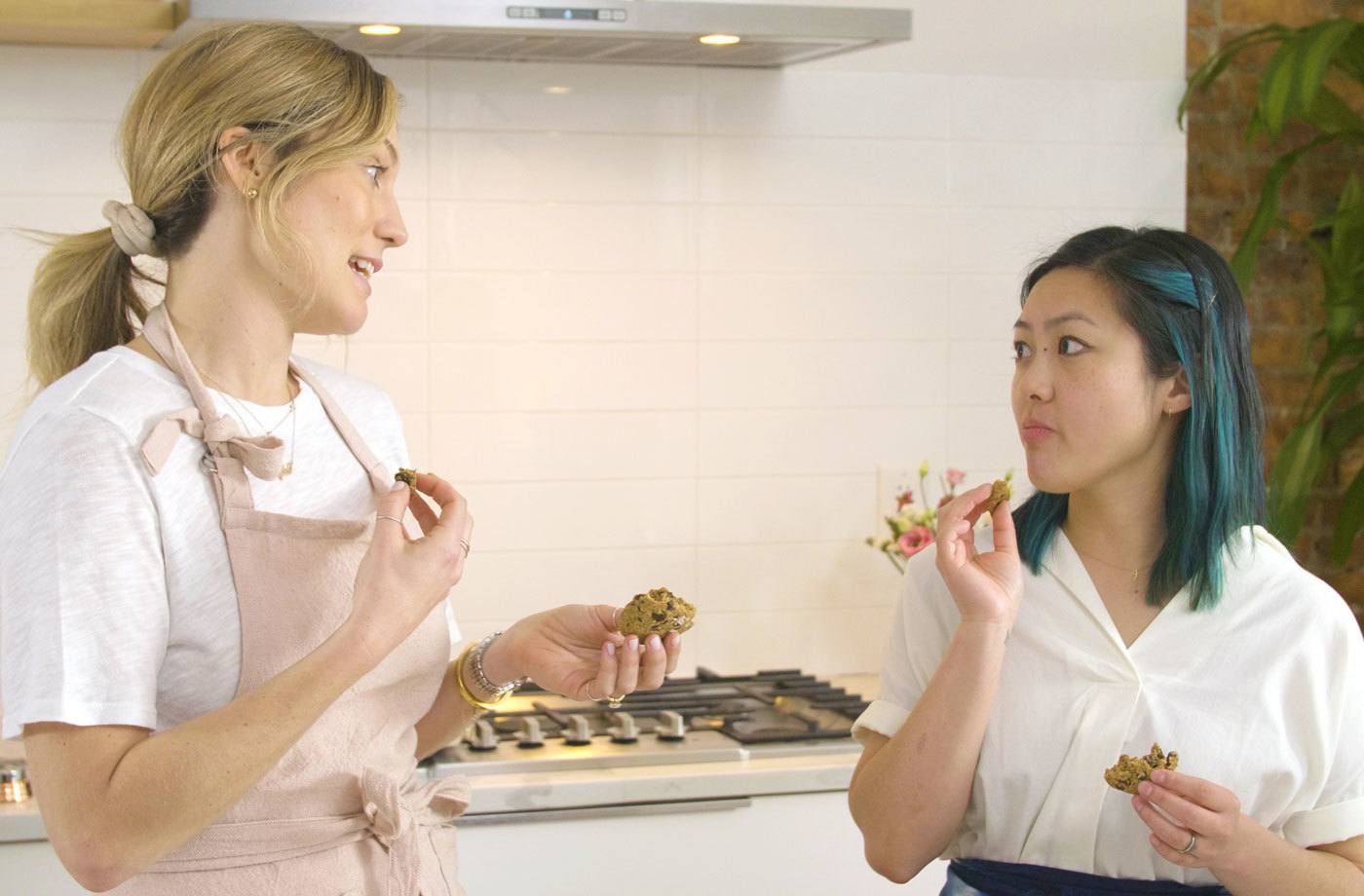 Have you ever tried to make a better-for-you version of your favorite treat? Things can go awry even when you follow a recipe to a T, and swapping out ingredients can end in disaster. That’s why we’re launching Alt-Baking Bootcamp, Well+Good’s newest video series aiming to help you remake your favorite classic treats with a healthier spin. While the foundation of classic baking is butter, eggs, and flour, chefs Mia Rigden and Jenny Dorsey are here to prove that you can rehab most of your favorite desserts to suit your health and dietary needs—without compromising on flavor.

Their first challenge? Chocolate chip cookies. “Whether you’re trying to eat a little healthier, you’re vegan, or you have some dietary restrictions this recipe is for you,” says Rigden, who is also the founder of RASA, a nutrition and lifestyle coaching brand. (And because they’re egg-free, you can eat the dough!)

However, baking is a particular science—which makes swapping ingredients a bit of a challenge. Here’s how Dorsey and Rigden made a chocolate chip cookie that’s completely vegan and gluten-free:

1. Use a “flax egg” instead of actual eggs

The first pillar of baking: eggs. “Eggs are used as a binding agent in cookies,” Rigden says. But obviously they’re a no-go if you’re vegan or have an egg allergy. That’s why she suggests using flax eggs instead—basically a mixture of flax seeds and water that mimics the binding properties of eggs in baked goods.

The second pillar of baking: wheat flour. This is obviously fine for vegans, but since we’re going the extra mile and making this recipe gluten-free, you also need to nix the flour. There are a wide variety of alt-flours out there, but in this recipe, Rigden and Dorsey use a mix of almond flour and coconut flour. “Almond and coconut flour are both gluten- and grain-free, which make them great alternatives to white flour for anyone with gluten or grain sensitivities,” Rigden says.

Just don’t make the mistake of swapping an alt-flour one to one with a regular flour because you might not like the results. For example, coconut flour can be a bit drying on its own, says Dorsey, which is why they added the moister almond flour to the mix. “Using a mix of them really gives you that soft moist cookie we’re looking for,” she says.

3. Go for coconut oil as your fat

The third pillar of baking: Butter. It helps add texture and flavor to cookies, but in this vegan recipe, our chefs opt for coconut oil instead. “[Coconut oil] doesn’t have the same water content as butter because coconut oil is pure fat,” Dorsey says. “So when making a recipe with it, you’ll have to add back some of that moisture somehow.” In this case, the water used to make the flax egg helps add back the moisture that’s missing from the lack of butter.

4. Make sure your chocolate chips are actually vegan

Dorsey says she uses vegan chips even when she’s not making a vegan recipe. Even on dark chocolate or semi-sweet chips ,double-check the labels to make sure there isn’t any milk in there. (Sometimes it can sneak in.)

“I really like to bake with coconut sugar,” Rigden says, which cuts down on the amount of sugar per serving. “In addition to its signature sweetness, it’s also full of antioxidants minerals and inulin, which is a prebiotic—that’s food for the good bacteria in our gut.” Dorsey says that it looks and tastes more like brown sugar than white.

Want the entire recipe? Watch the video above and see how it all turned out.

Want more of of our videos? Check out our latest episode of You Versus Food for healthy sushi tips, and The Avocado Show with fashion designer Rebecca Minkoff.