Gelato, frozen yogurt, sorbet and the rest: Which one should you feel least guilty about binging on? 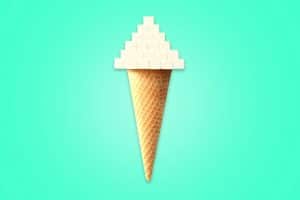 The average American consumes more than 23 pounds of ice cream every single year, which may help explain why obesity rates have hit an all-time high. Of course, reducing our intake isn’t an option—you can have my dipped cone when you pry it from my dead, sticky hands. But figuring out a healthier option? Yeah, maybe.

Working out which iterations of ice cream—gelato, frozen yogurt, sorbet, etc.—are healthier than others may seem daunting, but it’s actually quite simple. “The only difference that makes one slightly healthier than another is the amount of butterfat,” explains Ice Cream University founder Malcolm Stogo, who invented cookies ‘n’ cream flavor ice cream and the chocolate-dipped waffle cone (thank you for your service). Most traditional variations of ice cream contain somewhat similar quantities of sugar—a half-cup of frozen yogurt contains roughly 17 grams of sugar, while the same amount of ice cream has about 14 grams (both of which could flip, depending on the brand)—making the amount of butterfat their only real defining factor.

Butterfat is, of course, dangerous stuff when consumed in large amounts (like that found in 23 pounds of ice cream): It can pump up your cholesterol, which may raise your risk of heart disease and stroke. More butterfat also translates to more calories, which obviously promote weight gain.

Now, this doesn’t necessarily mean that a Slurpee, a popsicle or any other treat that leans more heavily into the “ice” than the “cream” (and therefore, has no butterfat) is innately healthier than a classic scoop of vanilla ice cream. While these desserts are typically fat-free, they also don’t boast the calcium and protein that comes with ice cream, meaning they’re essentially just watery sugar bombs. Rather than splitting nutritional hairs about whether snow cones are healthier than ice cream cones then, consider this advice from parent educator and feeding expert Dina Rose: “It doesn’t matter whether ice cream or ice slush is ‘healthier’ because neither should be considered a source of nutrients and neither should be eaten frequently. They’re treats!”

That said, there are some slight nutritional differences between more traditional forms of ice cream. With that in mind, here’s our power ranking of every type of ice cream—from least unhealthy to most unhealthy…

1. Sorbet (or Italian Ice): Sorbet contains no butterfat, making it completely fat-free and fairly low-calorie. Because sorbet is usually made up of fruit juice, sugar and water, it might contain slightly more sugar than other variations of ice cream; however, much of this sugar is “good” sugar—as opposed to “bad” added sugar—since it’s coming straight from the fruit.

2. Frozen Yogurt: Frozen yogurt is traditionally lower in fat than regular ice cream, because it’s made from yogurt instead of cream (duh). As an added benefit, some frozen yogurts also contain probiotics that support gut health: The“Live & Active Culture” seal, created by the National Yogurt Association, certifies that the brand contains probiotics. But be warned: Loading your frozen yogurt with piles of candy toppings will almost immediately send it rocketing to the bottom of this list.

3. Sherbet: Sherbert is basically a combination of sorbet and straight-up ice cream: It’s made with fruit and water, but also contains dairy (typically buttermilk). By law, sherbet must contain less than 2 percent fat, and it contains fewer calories than regular ice cream.

5. Frozen Custard: By federal law, frozen custard must contain at least 10 percent milkfat (butterfat), and at least 1.4 percent egg yolk solids—meaning frozen custard unfortunately falls into the high-fat category. On the plus side, egg yolks are an excellent source of biotin (and protein), which helps the body metabolize fats and carbohydrates, and has been linked to improved hair health.

6. Regular Ice Cream: As you might have guessed, regular ice cream—the kind that you might pick up in a pint at the grocery story—is arguably the unhealthiest form of frozen dessert on this list. It’s typically high in fat, sugar andpreservatives. “The top brands, like Ben & Jerry’s and Häagen-Dazs, are very unhealthy,” Stogo warns. That said, opting for low-fat versions of these popular ice creams can reduce their unhealthiness.

Now, let’s allow Stogo to make one thing clear: “Frankly, every one of these items has sugar,” he explains. “They’re all not very healthy.” In other words, replacing your regular ice-cream habit with sorbet isn’t gonna transform your beer belly into a six-pack.

Article by Ian Lecklitner is a staff writer at MEL

If you want to have your ice cream and still lose the weight see us for more at www.eliteweightloss.com where we can recommend the right type of supplements to help block carbs, fats, sugars

in some of the foods you ingest. Sizzle Me Skinny is a great product for this.