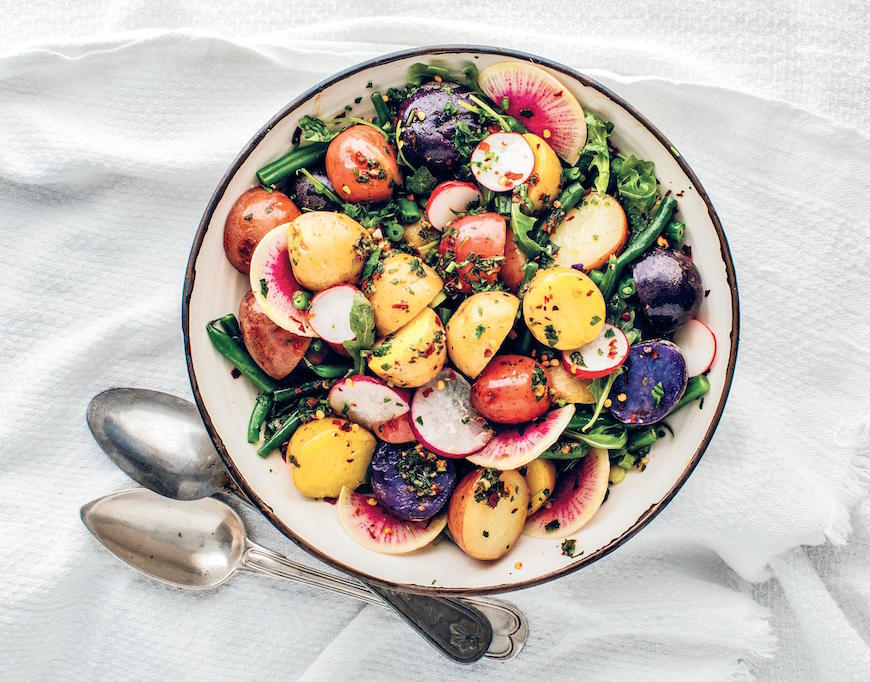 Memorial Day officially kicks off the start of summer cookout season, which means the return of some classics everyone loves to pile high on their paper plates: burgers (including their vegan counterparts), macaroni salad, grilled corn, and of course, potato salad.

Potatoes on their own are healthy, but most potato salad recipes call for heaping servings of mayo, which takes the fat content into iffy territory. Does this mean your spread has to be potato salad-free in order to be healthy? Heck no. Love & Lemons Every Day cookbook author Jeanine Donofrio has perfected a healthy potato salad recipe that has all of the good stuff—and none of the saturated fat.

“I love salad, but I wanted to show readers who might not think of themselves as salad fans how flavorful, fun, and nourishing salad can be,” Donofrio says. “So when I thought about including a potato salad, I knew I wanted to make one that was really vibrant, creative, and different from the traditional creamy potato salad I ate growing up.”

Instead of mayonnaise, Donofrio’s recipe uses chimichurri—a bright, herby Argentinian sauce—to spruce up the potatoes. “Made from minced parsley, oregano, vinegar, garlic, and olive oil, it’s typically served over meat or fish, but when I was on my honeymoon in Argentina, I got the idea to toss it into a veggie-forward potato salad,” she says. Her version of chimichurri uses white vinegar instead of red and a touch of smoked paprika.

Her take on healthy potato salad also includes plenty of fibrous veggies like green beans, arugula, and watermelon radish. “Watermelon radishes are one of my go-to ingredients,” Donofrio says. “I chose to use them to add crunchy contrast to the soft potatoes in the recipe. In addition to adding texture, their peppery flavor plays really well off the sharp, tangy chimichurri dressing.” Another reason she loves watermelon radishes: their gorgeous pop of pink. “I love to make vegetable-forward dishes with lots of bright colors and bold flavors, and watermelon radishes help me do just that!”

Ready to make this vibrant, healthy potato salad yourself? Keep reading for the recipe.

1. Place the potatoes in a large pot and cover with cold water by about 1 inch. Stir in the salt. Bring to a boil, then reduce the heat and summer, uncovered until fork-tender, 10 to 14 minutes. Drain the potatoes and set aside to cool to room temperature.

2. Meanwhile, refill the pot with water, bring it to a boil, and set a bowl of ice water nearby. Drop the green beans into the boiling water and cook for 2 minutes. Drain, and immediately immerse in the ice water to stop the cooking process. After 1 minute, drain and place on a kitchen towel to dry.

3. Make the chimichurri. In a small bowl, combine the olive oil, vinegar, garlic, red pepper flakes, paprika, salt, parsley, and oregano. This chimichurri might taste sharp on its own, but the flavor will balance as it covers the potatoes in the salad.

4. Transfer the potatoes to a large mixing bowl. Add the green beans, scallions, three-quarters of the chimichurri, and a few generous pinches of salt and pepper. Gently toss. Mix in the radishes, arugula, lemon juice, and remaining chimichurri. Season with more salt and pepper to taste. Garnish with the reserved 1 tablespoon parsley.

Here’s what to stock up on for your cookout if you’re sticking to the ketogenic diet. Another way to upgrade your cookout: grilling some greens.