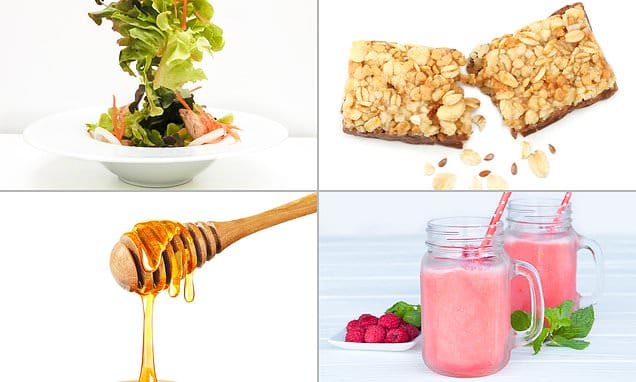 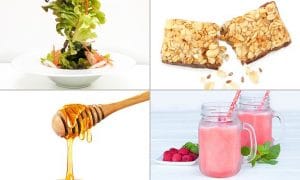 Many people wonder why they’re not losing weight when they follow a strict diet and exercise routine.

One possible reason is that what look like healthy options – the fruit and nut bar, honey, or fruit smoothie – aren’t what they seem.

Many foods and drinks contain hidden fats, sugars or salt, each of which will curb your weight loss efforts.

In addition to the kilojoules, these flavoursome foods leave you wanting more. Losing weight is largely about tipping the balance of kilojoules in and out.

That’s according to Dr Yasmin Probst and PhD student Vivienne Guan, from the University of Wollongong, Australia.

They revealed the five common traps that might be hindering your weight loss in a piece for The Conversation.

A Caesar salad could give you 70 per cent of your total daily fat intake for an average adult in one meal, Australian experts Dr Yasmine Probst and Dr Vivienne Guan say

Vegetables are good for you, absolutely. But salads often include other ingredients, which will hike up your kilojoule (kJ) (calorie) count.

Even the croutons are fried for added crunch.

So a Caesar salad gives you 70 per cent of your total daily fat intake for an average adult in one meal.

On par with this is a creamy pasta salad, often seen at family barbecues. A side serve of this comes in at almost 920 kilojoules (220 calories).

Fats provide the highest kilojoules from food (followed closely by alcohol, but more on that later). So be wary of dressings, sauces, gravies and high fat foods that may be adding kilojoules to your meal2. ‘I don’t eat junk food, just ‘healthy’ snacks

A yoghurt, fruit and nut bar, in replacement of chocolate or biscuits, can contain up to 4.6 teaspoons of sugar.

Australians consume more than 30 per cent of their kilojoules from discretionary or ‘junk’ foods, such as biscuits, chips and chocolate. None of these are providing us with any vital nutrients. These are the kilojoules we need to shift to lose weight.

But many people make the mistake of swapping junk food for seemingly ‘healthy snacks’, such as muesli bars and protein balls.

While these can claim to be healthy and organic, they’re often processed and high in kilojoules.

Muesli bars do contain healthy ingredients such as oats, nuts and seeds. But sticking all the parts together to form a bar is usually achieved with a form of sugar.

A yoghurt, fruit and nut bar can contain up to 4.6 teaspoons of sugar.

Next time you feel like a snack, why not substitute your muesli bar with a handful of nuts and seeds. This will provide you with useful vitamins and minerals – minus the sugar sticking them together.

3. ‘Natural sweeteners are better than sugar’

Natural forms of sugar such as honey or agave syrup do not differ from adding sugar to a dish, say the experts. Instead, add fruit for sweetness

There’s recently been a shift towards more natural forms of added sugar, but they contain no additional nutrients and no fewer kilojoules.

Adding honey or agave syrup to your dish does not differ nutritionally from adding sugar to the same dish. It may taste different, but you’re still adding sugar.

Next time you feel like something sweet, try adding some fruit instead. It has a natural sweetness and will give you extra vitamins and minerals.

If you find your downfall is adding sugar to coffee, try using soy milk instead of cow’s milk. It has a sweeter taste (but one that may need some getting used to in the first instance).

Or try reducing the amount of sugar you add by half a teaspoon each week. You’ll find you barely notice the difference after a while.

4. ‘Anything fruit-based must be healthy’

Think of the humble banana, mashed up into banana bread. This is not a bread at all, but a cake.

If you’ve ever made banana bread you’ll realise just how much butter and extra sugar gets added to something nature has already made to be sweet and in its own convenient package.

Meanwhile, fruit drinks generally contain only 25 per cent fruit juice and are very high in sugar. But even when drinking 100 per cent fruit juice, you’re missing out on the important fibre that comes naturally from fruit and helps your body recognise it feels full.

So whole fruit is best.

Fruit smoothies, although slightly better than fruit juices, are another one you can easily be caught out on. Smoothies are generally prepared in large servings and may have syrups or ice creams added to them, reducing their nutritional value by comparison.

5. ‘Alcoholic drinks can’t have too many kilojoules… right?’

If you’re trying to lose weight, you’ll know sugary soft drinks are a no-go. But some of the easiest mistakes to make are those in liquid form.

Many people aren’t aware how many kilojoules are in alcoholic drinks. An average restaurant serving of red wine is equivalent to 1.5 standard drinks and contains 480 kilojoules.

So after two glasses of wine, not only have you exceeded the recommended two standard drinks, but you’ve also consumed the equivalent kilojoules to eating two full cups of corn chips.

The same applies for beer, where just one schooner equates to 1.6 standard drinks which is the same as 615 kilojoules.

Of course, many of us don’t stop at one.

After two glasses of wine, you’ve consumed the equivalent of two full cups of chips in calories

Probably the most common food mistake when trying to lose weight is eating too much. We need to choose the right foods but the amount is also important.

We need to listen to the signals our bodies send when when we’re getting full to stop eating. The best way to do this is to eat slowly, chewing carefully. By slowing our eating we are more likely to be sent the sign of fullness before feeling it at our waistband.

TO HELP YOU FEEL FULLER LONGER AND GET THE ADDITIONAL FIBER , PROBIOTICS AND DIGESTIVE ENZYMES YOU NEED, TRY SIZZLE ME SKINNY